I didn't think I would be doing anything in this stylee when I started this blog, but here we are. I'm borrowing somewhat from Katie's super-blog, Run This Amazing Day - and you might realise how much when you see my picture poses! This will also be the first time my purdy face has appeared in a blog as far as I can remember... Girls, you'd better hang on to your boyfriends*.

So, the Hereford Half Marathon. It's held less than 30 miles from where I live and when I looked at the course map, I noticed that I only recognised 'Hereford' on it. No idea where the rest of the race was, didn't know a single place name. This could be fun I thought. And so it turned out.

I felt pretty good going into the race, but a little tired after a big night on the piss on Friday celebrating WonderWife's birthday. The sky was clear blue when I woke up, but when I got back from walking the dog, it had clouded over and cooled down. I still packed three cartons of pre-mixed Dioralyte and a sachet to go in my arm wallet though. The London Marathon taught me that much, that I can get outrageously – dangerously – dehydrated in less than seven miles.

So, we went to the race start, and there were lots and lots of people milling around. Lots of beautiful people, that is. Slim, tall, athletic looking… Oh, and me: 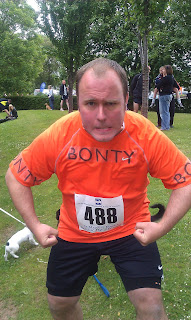 Looking good, I'm sure you will agree. And already a bit red in the face, despite not having done any running yet.

Anyway, the race started, I was right at the back because I was too short to actually see where the start line was. Turns out it wasn't far away, I just followed all the other runners and there it was. My lovely wife and MegaDog waved me off.

The course started up a hill (and on that hill were my friends Beccy and Iain, who had come across the country to support me, which was pretty cool! The main reason for doing the race was to support the hospice where Beccy's father had died a few months ago, and we raised £520 for them in just a few weeks. Woo hoo!), then took a left, and went up another fucking hill. This set a pattern for the rest of the race, hill after hill - some quick, some long and slow, and some barely recognisable as such until you thought 'Hang on, if this is flat, why am I knackered?'

The route quickly took us out of town, on to quiet country roads on a Sunday morning with thick grey cloud overhead. Perfect running conditions, pretty much. But the aim for me was just to finish, as I'd only run short distances post-London - and of course, London was only four weeks ago.

I was easing around, gradually loosening up, when my nasty habit kicked in. Sometimes I slow down to gee up runners who look like they might be struggling. Just a quick chat, and a 'you're doing great'; a bit of distraction usually works nicely. I ended up spending a couple of miles running with a lady called Katy, who was running her first half marathon, and she was struggling a bit. She had to stop with a stitch, so I carried on, but she caught up when I stopped to mix a Dioralyte. The last I saw of her was around mile 7, when she stopped on an unpleasant hill and I kicked on.

I also chatted to a lady called Laura, who had struggled with training because she had children. She really wasn't happy, but we put a mile in together, and I know she finished. She just had that kind of grit about her.

Anyway, what's to tell? None of the roads were closed and they were quiet country roads on the whole, so you always had to keep an eye out for cars. The route was pretty hilly to say the least, but I like that much more than running on flat. On flat courses, my hips get tight and my feet hurt, because they are always basically in the same position. Not so with hills, my ankles, knees and hips are constantly moving and changing, not to mention my feet. It just works for me, not least because where I live is 100 per cent hills.

Miles 8-10 were probably the best. I saw my wife and friends just after mile 6, mile seven I caught up with Katy, then miles 8-10 I passed a fuckload of people. Very comfortably, too. I was slaying those young, fit striplings on the hills. What made me chuckle inside was when they then tried to overtake me; I wasn't racing them, I was racing myself. They seemed to take it personally, in some cases, which makes it even more amusing. Of course, I know some people use it as a motivation to kick on themselves, and you can end up overtaking and being taken over for miles. That just bores me. So on I went, and saw WonderWife again on 10 miles, which was perfect. Another pick-me-up from the guys, another Dioralyte, and off I went to the finish.

It wasn't an easy race, but it was very enjoyable, and incredibly scenic. Because there were not many spectators, it being through countryside, unlike London you were able to get some banter going with people watching. I saw one guy four times, and by the end he had nicknamed me 'Cutie'. You get the idea.

I had it in mind to try to beat my half marathon PB. I don't know why, I just did. That was 2:08.39, set six years ago. This is only my third half marathon though, and I am six years older. Then I thought, wouldn't it be nice to have a half marathon time that is under the full marathon world record (2:03.59)? And it would, but Sunday was not the day I got either of those things.

The last three miles felt a little slow, though I averaged a 10-minute mile throughout which I'm reasonably pleased with. I'd rather be consistent than fast, for reasons I don't understand.

I came on to the Hereford race course for the last tiny bit of the race. I could see the finish line, and I knew I'd run 13 miles for the first time in what felt like an age. I can't count London in that, because it was so shite for me as a race. It had been probably two months, and I had begun to doubt whether I could do it. Way to validate, dude.

As I geared up for a big sprint finish - yes, really - I saw Beccy and her young son (I think he's four) running toward the end of the crowds, to run in with me, but I was gone by then - I did see them try to keep up, but I flew in. Well, it felt like I did. In reality, I may have jiggled, wobbled, and hobbled. Who knows?

Beccy came over as soon as I had stepped off the course. "You made that look so easy! And we couldn't even keep up at the end!" I got a big hug from her and an even bigger thank you, which was cool. Then WonderWife turned up, as she'd had trouble with traffic and had missed my grandstand finale. Disaster! But the huge smile on her face, and the licks from our lovely dog, made it all just fine. Oh, and I looked GREAT. 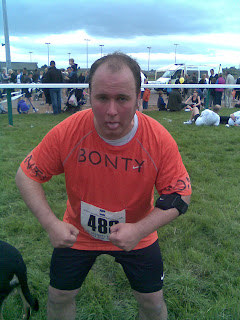 I'm pretty sure that arm wallet should go on my bicep, but it doesn't fit even when it's not done up. I think I may have bought a women's size by mistake.

To summarize: I had a great time, did some good for a great charity, and I'm actually fine with my 2:13 time (2:14 officially, but as I was at the back of the pack I didn't cross the line for a while and it wasn't chip timed… You hear me).

It's all good, dawg.