It feels like it's been a while. So here goes.

1: Apparently, the name Wendy was not invented for the book Peter Pan. Who knew?

2: You know the woman holding the thingy up in the Columbia Pictures ident thing? She was the voice of Tinkerbell in Peter Pan. True story.

3: As a journalist, you tend to find out lots of things you can never, ever print. I wish I could - only for the simple reason that there is no justification for a studio hiding an actor's sexuality in the 21st century. We go and see films because they are good or bad, not because the actor is straight or gay.

4: Troll Hunter comes out on DVD in the UK in January. Seriously excited about seeing that. Have you seen the trailer? Be sure to watch it to the end. Spectacular.

5: I've only run twice this week. Two four-milers. I don't know what's wrong with me. Lacking energy, motivation, and I feel very blue. But when I'm out and running... Well, the first run was sublime, the second awful.

8: When I've written this, I'm going to go and give my dog lots of fuss. This is my dog, Millie. She's seven, a rescue dog, and completely awesome. The only really naughty thing she does - that she's done more than once, I mean - is that she can't help herself if there is liquorice out. She demolishes it. 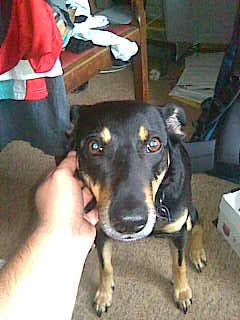 9: I absolutely, completely adore my dog. She is wonderful. Not just me, either. Everyone that meets her, pretty much.

10: I want to be an ultramarathon runner. That's the plan. I don't care for speedwork - though I am going to do some this marathon training cycle - and I love hills. I can go for hours at a 10-minute-mile pace. Sounds like an ultra runner to me. Your thoughts?

11: I get lots of emails. When I go away and come back, it takes a good week to get through them all. That's what I have been doing this week. I should have done it last week...

15: I got a guided tour of my brother's house this week, via his iPad. he lives in a really lovely house in North Carolina. If we get some cash together in the next 12 months, we might get to go and visit next year.

17: I had no beer yesterday, and ran this morning. Coincidence? I think not!

18: My life used to be quite rock and roll, but not so much these days. I'm not sure which I prefer, but I accept that it's an evolution, an ongoing process. Or do I? Maybe that's why I struggle with not drinking - that would be a real refutation of the past, and a step into the unknown. Maybe I'm just afraid of being really dull (not that non-drinkers are really dull, but I suspect I would be).

19: I got my inbox down to zero this afternoon. Happy days.

20: I am now going for a shower. I am looking forward to this very, very much.
Posted by badgerdaddy at 06:53