So, last September I lost my sun and moon, my right hand, my heart, in my dog Millie. It was hard but I knew it would be so. I did not anticipate it being as hard as it has been though, and talking to a friend in the supermarket recently she suggested it might be because the actual event was so badly handled by the vet, it was even more traumatic than it needed to be.

Been thinking on that, and she may be right. Who knows? But it struck a chord, for sure.

The other thing I have been thinking, and which really helps, is ever so simple. See, she was my bestie, we were joined at the hip and did everything together, all day, every day. I was very rarely without her right next to me. People actually often don't speak to me because they don't recognise me without her. Well, that's what they say… 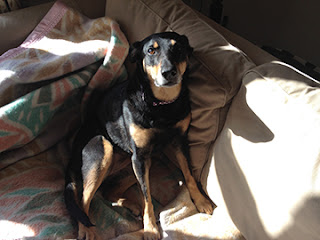 PS: I will be blogging a lot more soon. Comment if you don't give a fuck.
Posted by badgerdaddy at 05:32 42 comments:

It's arthritis. She hasn't said what kind (let's assume osteo, as it's in the hip joint), she has just said there are signs, it's very mild, keep doing what I'm doing - strength exercises, keep active, keep losing weight. So, I will.

But... There's a part inside me that says, I'm only 44. If I live as long as my grandad that's more than half my life with this fucking thing, and that part in my head assumes this is the only place I'll get it. Way too young for replacement, and they wait as long as they can to do that anyway as it doesn't last that long, now it's all about managing it, making the reasons it's there fucking do one, and getting on with shit.

Might go for a run tonight. Just a little one, with the dogs.

I am seriously, seriously pissed off about the diagnosis though. Did I stay too fat/heavy for too long? Surely a factor, but then it's also in the family anyway (as is the rheumatoid variety). So can I blame my parents or... No, I'll just get on with shit and manage it as best I can.

And keep that Ironman dream alive, obv. It becomes more relevant than ever.
Posted by badgerdaddy at 10:29 3 comments:

I'm not homicidal. Yet.

I've had some pain in my hip for a wee while. Physio said she thought it was a spur maybe, or perhaps just some inflammation of the stuff covering the ball joint.

I have done my exercises. My posterior chain is rocks now, my hips are good. But the pain persists. So next week, I have an x-ray happening, as my GP suspects it is arthritis. That would be... fucking annoying and no mistake. I would have to bring my plans forward by a year – or perhaps, perhaps, abandon them entirely in the worst case.

But I won't know for a good few weeks yet. All I do know is, it hurts. And the way the brain works, of course, I am assuming the worst.

A slight sensation of unravelling.

It's been a tough few weeks. I've gone from feeling strong to the opposite; from feeling quite together, to feeling splayed and unformed.

I've had a cold for a few weeks, my voice has been patchy at best for the whole time so far. It shows no sign of buggering off either; and it's not even a good cold, it's just a low-level crapness. So no exercise, and because of deadlines (this is my busiest time of year by some distance) I have done little other than work, look after kids, and sleep.

I'm glad I deferred the races.

But also... Fernster got a puppy just before Christmas, and tomorrow she goes to be euthanised. The poor wee girl never stood a chance thanks to the shitheads that bred her; she is a bright, sweet border collie pup, born with a likelihood of brain damage thanks to her genes, and which has manifested itself in obsessive behaviour and huge anxiety. It's like she is locked in. We know she loves us, but we also know we see less and less of her each day; we have had many conversations with experts, different vets, nurses, people working in dog rescue, collie associations, and they all agree this is about as good as her life will be, and there is every chance that she will turn nasty. Not out of choice, but out of frustration because, allied with her total deafness, she cannot be trained or have any semblance of normality in her life. Her first month or so were spectacular, Farley adores her and vice versa, but since then it's been a steep slide downhill.

I know it's the best thing, the right thing, to do, especially with very young children in the house, but still... Fuck.

In other news, there is no other news. Work remains work, everything else ticks along.
Posted by badgerdaddy at 08:07 1 comment:

In which I defer

It's true, I have deferred all of this year's races to 2020. April is too soon for a marathon after the back seizurey, cold-having, lung-coughing-up start to 2019 I've had. So I deferred that place, fine. I contacted the nice people at OSB Events about deferring my Holkham Half place in July, and it will cost me £75 to do so but... What are my choices exactly? And Ellesmere, the autumn half distance tri, I have not yet entered and my credit note is good to July 2020, so that's also sorted.

What does this do? It gives me the freedom to spend a year in the pool and on the bike, putting the miles in, with no deadlines or pressure. I can learn to swim, properly, for these kind of races, and hopefully, learn to love the bike part.

It takes some pressure off, it gives me a lot of freedom; there is a lot going on in other parts of life, and those other parts need some attention.

Imma still be writing shit here though, so don't go anywhere.
Posted by badgerdaddy at 06:34 No comments: